Ask any True blood fan and they’ll agree that it ended two seasons later than necessary.  Not all shows are given the luxury of drawn out story lines (*cough* Lost). Some don’t even get a second season.  With the official arrival of fall I’ve realized new shows are coming and some are to never return. Heroes, Twisted, Between, APB, and Containment never really got the send offs they deserved and yes, I’m still holding a grudge against such things. ABC Family is the reason I no longer watch a show until there’s at least a season under its belt. I simply would rather not get invested into a show that I know that’s never going to return.

In Pretty Lake everyone over the age of 21 is mysteriously turning up dead and the kids are not okay alone. While they’re trying to figure out what’s happening before they face their demise, the government is busy putting a quarantine around the city forcing the kids to make adult choices about survival. Netflix and a Canadian production company went half on producing this and they never gave the show the notoriety it so greatly deserved. The acting was amazing and the premise had so much more to be explored.  The show stars Jenneette McCurdy and Jesse Carere and it’s impeccable. There were so many ways this show could go and Netflix just gave up. We’ll never really know what killed the adults in Pretty Lake.

Teenager Danny Desai is handsome, charismatic, well known, and an alleged murder. After spending five years in a juvenile detention center he’s freed to discover the world is nothing like he once left it and his friends are no longer his friends as his reputation precedes him. The show is dark, twisted and it stars Avon Jogia. This, The Lying Game, and The Nine Lives of Chloe King is why I don’t trust any Freeform show unless there’s already a complete season. Freeform is notorious for throwing in the towel on something before the audience can even grow.

Although Containment did advertise itself as a mini series it still made this list. It’s based off a Belgian series called Cordon and was only put into place as a placeholder for new CW shows. I’ve watched the entire series at least three times and every time I get to the end I’m all “Why can’t it a be a real show?” Apparently ratings weren’t so good but it had potential! The show focuses on a police officer trying to be the good guy and protect the city of Atlanta while also helping the government stop the spread of a viral disease with a one hundred percent fatality rate.  He’s not certain the government is telling him all the facts and to make things worse his best friend and his girlfriend are both trapped in a cordon during the outbreak. The show stars David Gyasi, Chris Wood, and Christina Marie Moses. It brings up cases of morality, ethics, and its realistic science fiction that makes me question if something like this really did happen, could we as a human race survive it? 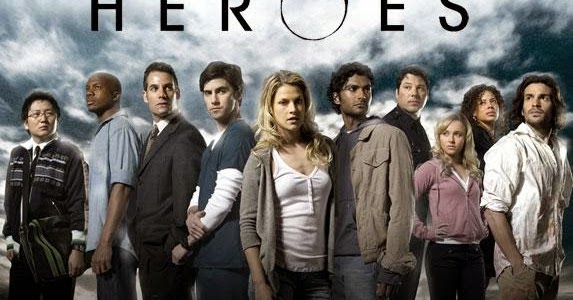 The first part of Heroes was beyond awesome! Then there was a writers strike or something and the story lines went off the rails (not True Blood off the rails but close).  I’ve watched this quite a few times and I don’t exactly know where the story lines went wrong. Heroes focused on a group of ordinary people around the world discovering they had super powers and the fact that there was someone out there trying to destroy them. These heroes work together to stop a catastrophic end to the world while trying to stay undercover in such an ordinary world. The show went on for four seasons and half of those seasons were impeccable. The last two were mediocre at best and could’ve been the reason why ratings took a nosedive. The finale was so abrupt that made me question if they knew they were going to get cancelled. The network tried again a few years later with the Heroes Reborn mini series and it piqued my interest but it could never live up to the original “Save the cheerleader, save the world.”

This is a more recent cancellation and it hit me right in the feels.  Of course I discovered APB right after its demise but man it was worth watching every episode. Billionaire Gideon Reeves’ loses his best friend in an attempted robbery and after the police’s lackluster investigation he takes matters into his own hands. He decides to fund his local police station and arm them with gadgets in an attempt to give them all the tools to find his friends’ killer.  He learns how hard it is to be a police officer in today’s society while making it his mission to eliminate crime in his neighborhood. All the other police stations hate Mr. Reeves and drones, and see something say something type of app. It’s loosely based off a true story and it reminds me of what would happen if Batman was a tech billionaire.  The season finale definitely made it clear that they weren’t expecting the cancellation and leaves audiences in awe.

Technically it’s not over yet but CW’s The Originals is heading for its series finale this fall and I hope they do this dark spin-off justice.  I could literally watch Joseph Morgan and Charles Michael Davis every week for the rest of my life but The CW is only giving us five season of The Originals. That will have to make do. Sure, the show gets a bit far fetched at times but its Julie Plec here and it’s a vampire series where anything goes. I’m going to miss Morgan as the likable villain Klaus Mikaelson and Davis’ infectious smile. The show follows the original vampires as they move back to New Orleans to claim their throne as royalty in the city they grew up in. The only problem is Klaus Mikaelson returns to discover his protege and best-ish friend is currently in that seat. The family faces trials and tribulations from their past, their present, and fend off threats in the future. You either love the Mikaelsons or you hate them there is no in between in New Orleans. This was a spin-off of The Vampire Diaries and it turns out I like this show way more than The Vampire Diaries as there is no Elena here. The Originals returns for their final season this fall and I’ll probably cry watching the last episode as I will miss Klaus and Marcel.

I tend to find a show I like and watch it over and over again. I’ve probably watched The 100 almost 100 times.  These will forever be around to watch but I will always wonder what if. I would have loved to know if Danny Desai ever got his life together? I would have also loved to know if Jake ever found love after that thing that happened in Containment happened (No spoiler alerts here, go watch it and weep!). What show do you wish would come back?