My first time at Cedar Point I was a kid with a lot of reservations when it came to testing fate and getting on rides but adult me is all, “bring it… Amusement parks wouldn’t build these roller coasters and put people on them if they weren’t safe.”

Cedar Point in Sandusky, Ohio is more than an amusement park it’s a thrill. Built on the Lake Erie Peninsula this 364 acre park is dubbed Roller Coaster Capital of the World and isn’t for the faint of heart.

It doesn’t open until May but I’m reminiscing. The last two years I’ve been to Cedar Point so many times to make up for my childhood reservations and it’s always worth skipping my local amusement park and driving three hours to visit the ever changing amusement park. Here are my top four reasons for returning every year.

The Roller coasters Are Addicting

With 16 roller coasters, this amusement park is home to some of the tallest and fastest roller coasters in the world. I could rant about all of them but my top three deserve their status.

Millennium Force is a classic. It was the first giga-coaster and constantly voted one of the best steel coasters. When it opened in 2000 it broke six world records. With a 300 foot drop at 93 miles per hour, it should make everyone’s list.

The Gate Keeper is four years old and is notorious for its winged seats where riders are seated beside the tracks with their feet dangling the entire time. I’ve been on this ride so many times and the butterflies still form all the way up that first hill. With a 170 foot drop, it had the highest winged inversion in the world.

The Valravn is the newest roller coaster at Cedar Point and last season I rode it until the ride felt old. When it opened last year it broke six records and at a whooping 223 feet at 75 mph, it is the tallest and fastest dive coaster in the world. That first drop where you’re dangling at the top of the hill makes you question all of life’s choices but smile anyway because you know you’re gonna do it again.

With sixteen roller-coasters you could spend all day chasing thrills and when you get tired and need to chill out it’s hella convenient to just walk over to their newly designed waterpark or sit at the beach.

You’re going to leave with at least one food baby.

The food here is enough for you to just sit around all day,  people watching,  and contemplating the meaning of life. You have roller coasters, a water park, the beach and all this good food that it will feel like you died and went to food heaven. Sure they have a Dairy Queen, Dippin Dots, Johnny Rockets, Panda Express, Aunt Annie’s, TGI Fridays and a Subway inside the park but Cedar Point also has dozens of its own restaurants like the Dive in and even a buffet. The most memorable thing I ate at Cedar Point was a funnel cake. It wasn’t just any ol funnel cake this was a toddler sized funnel cake where you need at least three people to go in on it with you. It’s topped with ice cream and fruit and as soon as you’re face to face with this beast you question if it was a good idea. Your taste buds will thank you though.

This amusement park could turn into the hardest game of “What do you want to eat.” If you want to eat it all though I’m not judging but you can do that. It turns out for $31 you can get an all you can eat day pass. If you’re smart though you’ll finese the system. (More on affordability later)

Gone are the days where I show up and pay for two general admission tickets for $65 a day. Because smart people know that a season pass is the smarter way to go. Last season I did the math and my two day trip was getting pricy but I also discovered that you can buy a season pass on a payment plan and still use it while you’re paying it off. I had to call and confirm and was shocked. “I can use it at the park while I’m still paying it off?” I’m sure the representative laughed at my shock because last summer I went about three times. And you can’t beat their payments plans. You can get a regular season pass for six payments of $23 or ball on a budget and opt for the platinum pass at six payments of $35. Either way don’t drain your wallet when you don’t have to. The money you save can be used for a souvenir or a burger. #yourewelcome

This Park has a Beach 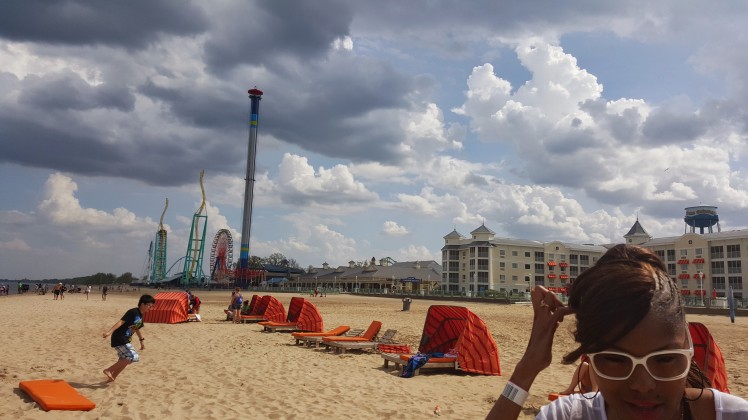 Yes, Cedar Point has a water park but it also utilizes being parked next to Lake Erie and you can walk right out of the park and be on the beach. Sometimes there’s parties going on, they show movies on the beach, and sometimes it’s just quiet and still and it’s a breathtaking view to sit back and unwind after a crazy coaster filled day.

Have you checked out Cedar Point? Did you know about the season pass payment plan? What’s your favorite coaster.