Did the world end on the season finale of The 100? For Clarke Griffin it kind of sorta did. 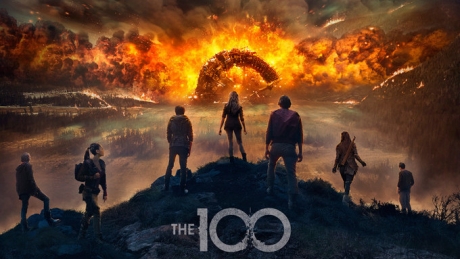 Summertime is almost here and season finales make this difficult to deal with. CW’s The 100 is most definitely in my top 3 favorite shows. I’ve read the books and watched seasons of the show at least twice. If you don’t know what The 100 is…  uh get your life! The series follows the trials and tribulations of 100 juvenile prisoners who are sent to Earth to see if it’s survivable after a nuclear war years ago. Prior to their journey they lived in a space station and were incarcerated for crimes ranging from theft to just being born (because you’re only allowed to have one child on the Ark).

Season one followed them as they adjusted to Earth and hit them with the realization that they were not the only dwellers on the planet. Season two they faced Mountain Men who wanted to harvest their blood so they could survive outside their bunker. Season three they fought with the politics of the different clans and an artificial intelligence taking over people’s brains.

This season they face their biggest challenge yet as radiation is increasing, they must unite the clans to save each other from what could be the end of Earth. This might be the most intense season yet and the finale had me on edge the entire time. I’ve never had to pause something so many times and I’ve never been prouder of Octavia Blake! I just wanted to jump in the TV and hug her. It’s been a blast watching her blossom from the girl that lived under the floor to a leader of all the clans! I’ve also never been so upset. I’m convinced Jason Rothenberg doesn’t want Bellarke to happen! (Hence putting them on separate planets and all.) I love Bellamy Blake and Clarke Griffin together. Bell doesn’t want to admit it but he’s in love with her,  even if they get on each other’s nerves. I almost cried when they took off without Clarke and my heart dropped as Raven Reyes tried to MacGyver their way back into their old home on the space station. There’s seven of them and enough oxygen for two. These guys are cutting it close.

This season we finally all see the evolution of Jasper Jordan. He was my favorite character (next to Octavia) when it comes to character development. In episode one we meet this spunky Jasper Jordan excited for Earth until Earth proves to not be so kind to him. He’s survived almost dying in season one and the thing that takes a toll on his spirit is when Clarke kills the Mountain Men to save what’s left of the 100 trapped in the mountains. In killing the Mountain Men,  she also kills Jasper’s girlfriend and that promptly turned him into an alcoholic who’s tried surviving and aspires to live. It was no surprise when he objected to joining the survival bunker. I’m intrigued to see how his death affects his best friend Monty in the seasons to come. If there’s one thing these people know how to do it’s survive. Clarke misses both windows to make it go the bunker and to board the ship but somehow survives radiation because of the nightblood in her system. The last scene fast forwards six year later an elated Clarke notices a ship and assumes it’s the eight people coming back to Earth only to discover its not. After her Friend Madi (who is she?) fetches her binoculars we see the words Eligius Prisoners. Leave it to peeps to go back and connect the fact that Eligius mining (with the help of the AI Becca) used to try to run nightblood trials to protect people from the radiation. Are these survivors nice? Is everyone dead? Wouldn’t it be bizarre if the story line repeated from day one like the original 100?

How did she find Madi? How do Clarke and John Murphy keep surviving the most impossible situations? Who are these prisoners? Is Becca finally gone? Why haven’t the clans in the bunker resurfaced?

This episode leaves us exactly where they want us patiently waiting for season five. In a show that has me questioning morality and ethics I’m never really ready for an ending. Until season five we just have to sit back and enjoy the last season of Orphan Black.

What did you think of the finale? Leave your thoughts in the comments section below.