I gave my first keynote speech at Grlpwrpgh’s inaugural Conquer Your Queendom Conference on April 28th 2019. At first when founder of Grlpwrpgh, Amanda Cowan asked me to speak I was all, “What am I gonna talk about? I have no idea what I’m doing or how I got here. Who is gonna listen to me talk?”

Then, a light bulb went off and the fact that I proudly unapologetically admit that I have nothing figured out became the topic at hand. Props to Amanda for seeing my sunshine even when I can’t exactly see the big picture. That’s what Grlpwrpgh is all about!

As I took a seat waiting to speak there was a card in the center of the table that read, “Share a quote that inspired you.”

I had speaking points prepared as I can’t memorize a thing to save my life and I realized how in the moment that card was. 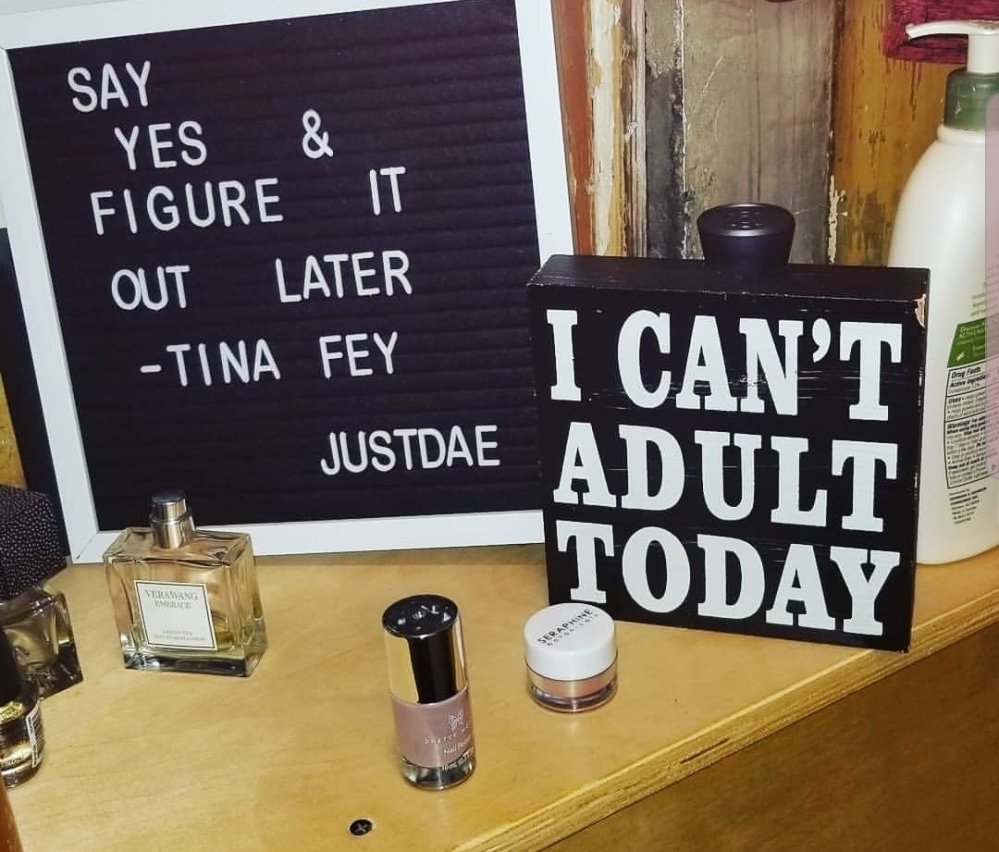 “Say yes and figure it out later.” That’s a quote I live by and that’s how I started my speech on how not knowing what you’re doing is okay.

If I waited until I completely figured out everything, life wouldn’t be as much as an adventure it’s been thus far. So I stopped, took a deep breath and didn’t picture everyone naked as my boyfriend suggested. I started with a suggestion.

Take a moment and think about a few words to define yourself.

Do all those things relate? Maybe they should but I’ve learned the power of these unrelated definitions make the journey to your goals way more interesting.

My name is Chardaè Jones and I’m the Mayor of Braddock, PA and I’m not afraid to admit that at 30 years young, I have no idea what I’m doing. I’m learning that the power of yes is bringing me opportunities. I’m truly living my mantra of saying yes and figuring it out later.

If anyone tells you that they know exactly what they’re doing with their life step away from them because people who have life figured out have no room for growth and quite frankly, they’re not fun. I’ve accepted that a while ago that I will never have everything figured out.

All my life I’ve defined myself as a writer. I attended Carlow University and earned a BA in Professional Writing and Mass Media Communications. I was focused on making journalism work in a Pittsburgh market and it was hard. It wasn’t until I got out of my own way and started accepting these rest stops along the way as opportunities for growth towards my goals.

It turns out I needed rejection early on because I hadn’t experienced much which meant I didn’t have much to say in my writing. I’ll never forget applying for a City Paper writing internship and being turned away for lack of experience. At least they gave me a reason, Whirl Magazine just said, thanks but no thanks. These rest stops fueled me to keep going though. I was going to be a writer.

I was focused on being a writer but rest stops led me on a journey to other goals and gave me great things to write about. Let me take you on the journey that led me to Mayor.

I grew up in the Braddock Library. It was my afterschool program and summer camp. It was my home away from home. I knew the librarian Miss Francine and no one ever wanted to ever leave because at the time they fed us.

The Braddock Carnegie Library was where I learned that I didn’t want to be a Girls Scout. I’ll never forget going on a field trip to the middle of the woods and the girl next to me picking up a spider while the instructor was taking us on a tour of the camp grounds. It was when said girl asked me to hold her spider that I knew I was just there to bake cookies. That wasn’t a thing so I wasn’t interested.

I needed those experiences though.

Early on someone told me that knowledge was the only thing that couldn’t be taken so I learned everything I could as a kid and read it all. That’s how I fell in love with writing and that’s what eventually led me to Carlow University.

Carlow University instilled service in me. From that first year service project to planning toy drives, I had a hunger for finding ways to give back even if it was just my time. I remember traveling to Carrick High school to mentor and help kids create a commercial for healthy eating and it didn’t feel like work. It was fun for them and me.

Graduation Day at Soldiers and Sailors Hall I cried not knowing what was next. They were “yay I made it” and “oh my gosh what do I do now” tears.

I stayed at Carlow as an administrative assistant because it turns out I’m awesome at that. Then I got laid off from my first ever full-time job.

I cried for real this time.

Not knowing what was next, I joined AmeriCorps Keys Service. I’ll never forget being slated to start work at the Braddock Borough Building and just a few days before being told that I was moved to the Braddock Youth Program.

“You’re gonna create a summer lunch program but the teens will cook the food to feed to the kids on the playground.”

I’ll never forget looking at the placement coordinator with a blank expression as I had taught a class on Photoshop in high school but never anything of this magnitude.

I created a summer lunch program that was tied to a job readiness program. I had no idea how to do that but I did it. That rest stop taught me I was good at math but because I grew up in an era where people told girls they weren’t great at math I wasn’t confident in it. It wasn’t until I was teaching teens how to break down costs associated with the source of our food that I realized that I wasn’t giving myself enough credit.

I didn’t think I could make a difference in these teens lives as they had issues in their home life that hurt my heart. Going into it I feared that these teenagers wouldn’t listen or learn anything from me but at the end of the summer term I wanted to cry for them as I’ll never forget coming home to my mom and asking, “What will they do without me?” It turns out it worked both ways. They had no idea the impact that they made on me over the summer. I never realized how much responsibility and how hard it is for teenagers. AmeriCorps was one of the greatest summers of my life.

When it was over, I had a temp job and zero direction after that. I’ll never forget my friend suggesting that I be a flight attendant as she told me that I had the personality for it. I was all, “I don’t know about that.”

After discovering the flight to the interview was covered by the company that no became more of a yes. I said yes to that because I wanted a trip to Texas. I had never been to Texas and I heard the food was good. “At least I’ll get to go to Texas,” I told myself as I readied for the trip. I got there and was elated to just be there. Flight attendant interviews are about eight hours long with thirty people rotating rooms in hopes of getting a job. This was peoples’ dream job and here I was just nonchalantly asking questions because I wanted a trip to Texas. I was shocked when I discovered I got the job. Training was an absolute blast and if I ever did it again, I’d want to be a flight attendant instructor as I thoroughly enjoyed training.

I didn’t last an entire year, in fact, I didn’t even last six months but it turns out I needed that opportunity as it taught me that I could really do anything and prepared me for any emergency situation that could ever arise. Takeaways were that I’m calm under pressure, talking to strangers is fun, and if I can make it in New York, I can make it anywhere. A not so fun fact is that flight attendants only get their hourly rate when the aircraft door is closed. I wasn’t making any money, I was having fun, but it really just felt like a life sabbatical.

I came home after Corona, Queens and Dallas, Texas because the Universe wanted me in Braddock. I joined group after group trying to find how to make a difference in my community. I chaired the National Council of Negro Women annual luncheon and mentored kids at the library through the local Reading Buddies Program. But I wanted to do more.

Then a Facebook post at the beginning of 2018 changed everything. The Braddock Council President posted something on Facebook asking for help in the community and I’ll never forget messaging her, “What do you need help with?”

Who knew that would be Pandora’s Box? By the end of the year, I was Co-chair of the Home Rule Committee, Co-Chair of Community Day, and a member of the Braddock Economic Development Corporation. I was and still am a full-time employee and volunteer.

I do all this to say don’t block your progress by pigeonholing yourself into one thing. Sure be laser focused on your goals but don’t miss opportunities because of that focus. There are so many cool rest stops on your way to your goals that you will miss out on. Yes I’m a writer, self-publishing consultant, author, an a IT business analyst but my willingness to say yes has also led me to being a social media manager, event coordinator, teacher, and now Mayor of Braddock.

I keep saying I don’t want to go further than mayor but a few years ago I also kept telling people in the community that I wasn’t into being a politician and look at me now. I have so many people who point and say told you so. I just want to spark the change to show young people that they can truly be the change they want to see in their community. I am on the ballot in May and I’m running for a full term. I’m smart enough to know to make plans for the future but be open to change. Flight attendants used to say “We’re flexible like palm trees.” Be a palm tree to opportunity.

Think about those key words from earlier and leave some blanks because it’s truly when you don’t have things figured out and you accept that, you will stop freaking out and realize you’re right where you need to be. These rest stops aren’t failures they’re growth opportunities. Life truly is constantly asking yourself, what do I want to be when I grow up.